Be the First to Receive our New Recipes?

Make this easy mooncake recipe with about 1000 calories per piece, so you will be able to enjoy its delicious taste and texture when you can’t buy them where you live.

This year (2015) the Chinese population will celebrate the Mooncake Festival on september 27th. This yearly festival takes place on the 15th day of the Eight Lunar Month in the Chinese calendar and is therefore also known as the Mid-Autumn festival.

Traditionally, children come out to play with lanterns and mooncakes are exchanged like these cute ones given to us by our Chinese neighbour 10 years ago: 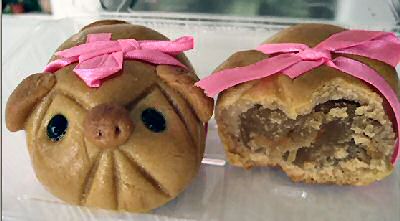 We woke up today and got a text message from our neighbour saying that "there are some piggies hanging on your fence". Turns out that these "piggies" were mooncakes shaped as a pig. Traditionally however, mooncakes are simply flat, 4 inch (2 cm) broad cylindrical pastries (kind of like an ice hockey disk).

Depending on the filling, they tend to be extremely delicious (these ones were sweet, with a little touch of lard and peanuts), what explains why half of the cake was already gone by the time I had taken my camera out.

What is the Chinese mooncake festival all about?

Since the moon is celebrated, it is common to have roasted pig barbecues after sunset, accompanied by exchanging mooncakes and pomelos: a green citrus fruit that looks like a humongous grapefruit, but with a less pronounced taste.

Since the landing on the moon by the Americans, much of the cultural significance of the mooncake festival has disappeared… During the first landing on the moon in 1969, no camera captured "Chang-Er": the Chinese goddess of immortality who supposedly lived on the moon , nor "Wu Gang": the woodcutter who was banished to the moon and became Chang-Er‘s friend and servant. Wu Gang was punished "to cut down a cassia tree", which is an impossible task that can never be completed: the cassia tree is immortal and will grow back each time it is felled.

Never mind that Neil Armstrong has landed on the moon and has “spoilt” these ancient beliefs, the Chinese still celebrate it year after year.

What is a mooncake?

Mooncakes are sweet confectionary and are shaped like the moon: round 🙂 .

Inside the mooncakes there are sweet fillings and over the years, new flavors have emerged and as such, you can get a wide variety of different mooncakes to give to your family members and friends.

Children will walk around the neighborhood with their lanterns. The lanterns come in all shapes and sizes. Some of them resemble animals and others are just plain lanterns. The adults sit around drinking tea with a piece of cake, and if they catch the reflection of the moon in their tea, that would be the perfect moment for them.

Old Chinese ceremony scripts mention that it was the task of the emperor to make special offerings to the sun in spring and to the moon in autumn. Mooncakes where part of these offerings.

Legend has it that during Chinese history, messages where hidden in or written on mooncakes: the message was delivered, read and then eaten as to erase all evidence of the secret message.

How to make the lotus seed paste

How to make the syrup

How to make the skin

How to make mooncake