Look at the pictures and learn about Chinese new year: traditional food, where to eat, what to eat and what to avoid.

Chinese New Year (CNY) is the morst important festival of the Chinese calendar – also known as the spring festival -. It is celebrated for 15 days, starting on the 2nd new moon after the shortest day of the year and ending 15 days later during the full moon.

During these 2 weeks, most Chinese will travel to their parent’s hometown and visit friends and family. On the evening of CNY, the reunion dinner takes place, when family members meat up. Special food will be served and prosperity will be shown by all means imaginable. 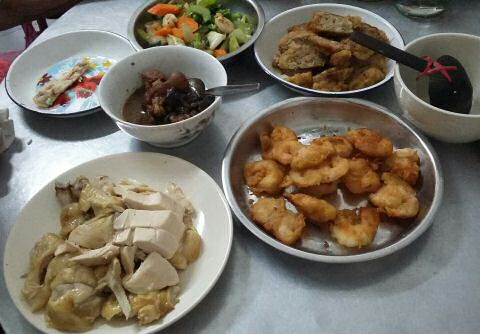 The biggest variety of different food is cooked and eaten during the Chinese New Year reunion dinners and served to the Gods and ancestors. Apart from humongous traffic jams on the Malaysian highways, the real customs are as follows:

Tet or Vietnamese New Year is the most important and popular holiday and festival in Vietnam. It is celebrated on the same day as Chinese New Year, yet with a one-hour time difference due to the different time locations between Hanoi and Beijing. It shares many of the same customs of CNY:

What to eat in a restaurant during Chinese New Year? 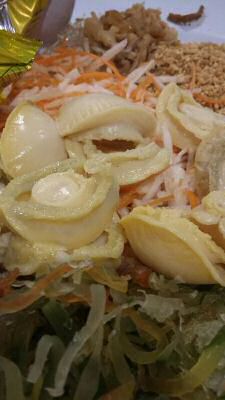 A typical traditional Chinese new year food in Malaysia and Singapore is "Yee Sang". This dish will only be served around CNY as a starter. It’s a salad dish with fresh fish (in the picture on the right you see abalone), shredded vegetables (turnip, carrots…), sesame seeds, lime, a sweet sauce and some other condiments and or (vinegar) sauces.

Yee Sang is also called the "prosperity toss dish". Everybody will use their chopsticks to toss all the ingredients together whilst wishing each other all the best for the next year (good health and good wealth). "Yee sang" means raw fish but also sounds like abundance and prosperity.

Avoid having breakfast in a Chinese coffee shop, because mostly there will be a huge crowd (hence no free table) and the food will be prepared hastily (hence not as good as it should).

What not to eat: some restaurants in Malaysia will recommend you their dishes specially made for new year. However mostly the price is made for CNY and the dish is a tourist trap.

When you are a group of about 8 people or more, you could enter any Chinese restaurant and order (or have no other choice than to accept) one of their special CNY menus (like you will notice every other Chinese family or Chinese friends will be doing in the restaurant). Do expect not to be attended to when you want a table for 1 or 2. It’s always a good idea to book in advance when you want to eat during Chinese new year.