Learn about the dragon boat festival food and history, so you will know how to buy or make the best Chinese rice dumplings.

This month will be the Chinese festival of bak chang or rice dumplling, usually celebrated on the 5th day of the 5th lunar month..

This festival commemorates one of China’s greatest poets and patriots who protested against corruption in the Government and after being dismissed wrongfully, he killed himself by jumping into the river… Legend has it that boats raced out to save him…The people could not find his body and decided to throw rice dumplings into the river so that the fish does not eat his remains….

Ok, I guess his body was never found as this festival is still celebrated till now…. 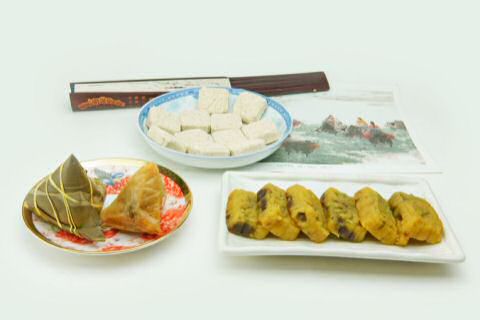 Rice dumplings ingredients = rice, pork meat, dry prawns, salted duck egg yolk, chestnuts and mushrooms. There are various variation depending on the dialects….They are all wrapped in bamboo leaves and tied with raffia strings (intricate process in the making and definitely not for people with arthritis finger like my husband!) and then steamed for hours..

My mother, well of course, who else, makes the best dumpling in the whole wide world….! I used to get requests from my friends who have tasted her dumplings before to get some during the festival but i have to put a stop to that now since my mother is now very old and I don’t want her breaking her back making dumplings! Anyway, too much dumplings will make you look like one so beware!

The secret to a good dumpling, as I was told and have tasted it of course, is one with pork meat that has a little fat in it. I.e. pork belly is the best, and when you bite into it…it literally melts in your mouth and the combination of taste is heavenly.

Well stay away from Chinese rice dumplings…if you have high cholesterol, high blood pressure, a couch potato and hates exercise! The rest of you: do go and try some…if you can get your hands on some home made bak chang…